January 10, 2016June 11, 2017
A few weeks ago (ok way more than a few weeks by now), my family and I went out for a girls only Sunday breakfast, yes breakfast not brunch. It was a planned day of no kids (I don’t have any), girl talk (I’m not good at), mimosas (now we’re talking) and amazing food (jackpot). This sounded like a good morning to me, but the getting there was an adventure in itself.
There were 6 of us, and no one drives a minivan. that meant 2 cars, no problem, except that my mother is THE WORST navigator in the family! She can’t read a map, GPS or hand written directions to save her life, and who gets the joy of finding this place with her, you ask? Why me, of course. So here I am driving to Philadelphia (no big deal, done it tons of times), with my mother (I’m ok with this), my sister is the only one that knows where the place is (she’s in the other car, that left already). I have a vague idea where I’m going, but I’ve only been there once before and that was in a snowstorm, yes a, complete whiteout, shutdown the city, roads haven’t been plowed, and I wasn’t driving snowstorm. So ask me if I remember how to get there…. Long story short, by the time we get to the restaurant a half hour after the rest of my family, my mother and I are not on good terms. I’ve driven 4 miles out of my way and passed the place twice without knowing it, all because she couldn’t read the directions sent to her, figure out how to use her phone navigation system, or deduce where we were while I dealt with traffic. yeah, needless to say, I was pissed and at that point just wanted to go home, drink something strong (don’t judge) and sleep, did I mention it was only 9:30 in the morning.
We finally get to The Farmacy,  a restaurant that specializes in only serving local organic and sustainable foods, and it looks like nothing, literally it’s on a simple little corner with a simple store front, that you would miss if you didn’t know it was there. Nothing special, right? but it really is, the co-owners graduated from a culinary school just a few blocks away, and instead of leaving to study in the big and famous dining rooms in New York, Paris, London, they chose to stay in their neighborhood and bring their vision to life, and it’s working, they didn’t do anything large and in your face, but this small, nothing special store front hides an adventure that your palette must go on 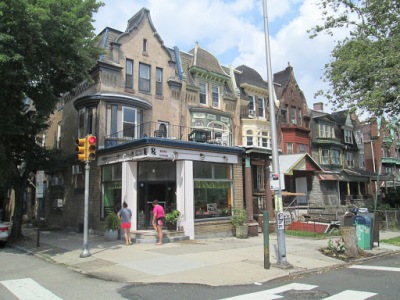 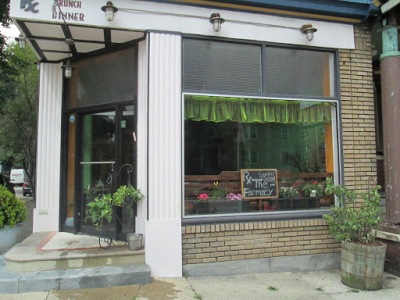 Then you get inside, and while it’s no TARDIS (Time And Relative Dimension In Space), yes, I’m a Dr. Who fan as well, it is bigger on the inside and much nicer. It’s intimate without feeling like you’re on top of the other patrons and all in their hot sauce, plus we got great seats, right next to the kitchen, score!!! 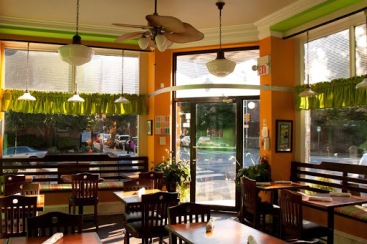 And they didn’t disappoint at all. I will willingly admit that I can’t remember everything that was placed before us, so the labels are pretty general, but everything was amaze-balls (yes, I said amaze-balls). I will describe as best as I can what it all tasted like to me…

Let’s start with the liver, for the record I don’t like liver, I think it tastes like licking a rusty pipe in overcooked granular form. Not this one, it was smooth and seasoned which made all the difference, the salmon was sooo fresh you could still taste the ocean (we fought over that one), the mustard was tart, but not clear your sinuses vinegary. On to the cheeses, the Local Blue was, I can’t even describe how damn good that cheese was (for the record it’s NOT called Local Blue, that’s just what I call it cuz it’s a blue cheese made locally), it was a balance of strong, stinky, salty, savory, and crumbly (couldn’t think of another ‘S’ word). According to my sister the one with the balsamic rind was like butter, not country crock or land-o-lakes or even those unsalted sticks you buy for baking, but real straight from the cow, full fat, expensive as hell, special occasion butter. The rich creamy kind that people look down their noses at you for eating. The mild blue (again, that’s just what I’m calling it) was very close to a sharp cheddar the thin blue lines I believe were some type of ash. Did I miss anything?, oh yes, the meats, don’t ask me what they are I can’t remember, all I know is that they were good and they were pork (again, cue Homer Simpson).

Then came our fruit plate, now keep in mind, we haven’t actually to our breakfast yet. Apples, oranges, grapes, almonds, raisins and strawberries topped with yummy yogurt and oats was devoured in seconds. Hey, there were 6 of us and it was a medium sized platter, we did mix and match with the chef’s farm board to see how things would taste together, of course it was all good.

Then, our breakfast came…we all tried to order different things, so that we could sample each others plates and it was great….

My youngest sister had the S’Mores French Toast graham cracker crusted lebus brioche bread, nutella, house-made burnt marshmallow with a side of duck fat fried potatoes (I refuse to call them tater tots or hash, they are sooo beyond just tots), the marshmallow topping was made in the kitchen not store bought. lightly toasted and so sweet even my diabetes inducing need for the sweet was tested. A cinnamon/sugar graham cracker crust around the toasted bread with Nutella sandwiched in the middle made it well worth the blood level spike.

Next came the Chicken and Waffles, my mother and 2 cousins ordered this little gem (can I call it that?), and the picture below doesn’t do it justice. The menu has it described as butter milk fried chicken, house made waffles, creme brulee butter, mclures maple syrup, with duck fried potatoes, ad I agree. The waffles were fluffy and light, with a beautiful golden crispy crust, but the chicken…oh man, that chicken was everything fried chicken should be and most places can’t ever get right. Fragrant, well seasoned, crispy, moist and juicy. I don’t know what was in his batter but I could smell either cumin or curry that added just that little something extra to the crust. This was also served with duck fat fried potatoes…YUMM!!!!

My middle sister got the Apple pie pancakes, which consisted of buttermilk pancakes, local apples, streusel, creme anglaise, creme brulee butter, Mclures maple syrup and of course duck fat fried potatoes. I’ll give you a minute to re-read that description, yep it’s an apple pie for breakfast. Classic buttermilk pancakes, not too thick, not too thin, fluffy moist insides, golden brown on the outside and then apple pie, more like a cobbler in looks, with big chunks of spiced apples, crust crumbles, a sweet creamy custard sauce and real maple syrup it’s like a warm fall morning for breakfast.

Last, but not least, was my meal…butter poached shrimp, organic stone ground grits, jalapenos, Mclures maple syrup, Kreider farms egg. That’s right, Shrimp and grits. Do you know how hard it is to find good, I mean really good restaurant grits, damn near impossible. In all the years I’ve attempted to enjoy grits outside of a personal home I’ve been sadly disappointed, only one other time have I found grits nirvana was a small little place up in Bed-Stuy, Brooklyn (but, that’s another story). This right here was everything I’ve wanted in grits, thick, creamy, salty, buttery, sweet with the maple syrup, a hint of heat from the peppers. The egg and shrimp on top was just a gilded lily that I didn’t mind at all and quite enjoyed.

During all this feasting, what you can’t see is the curious and dirty looks we’re getting from the other patrons. It seems that there were a few regulars, which doesn’t surprise me at all, that were not pleased with the fact that not only did a group of unknowns get a coveted seat near the kitchen, the chefs both came out and spoke to us for a length of time, and we got to stay as long as we wanted. The looks were memorable to say the least, and we really didn’t care, cuz the food is THAT good.
Thanks for reading,
Jamila