November 12, 2016June 11, 2017
So this is my 2nd  attempt with the Great Cakes Soap Challenge  and the October one looked simple enough, and since I’m a newbie at this soap thing, that means I had to make it 7x more difficult for myself.
From the start this did not go easy, I wanted to try a new soap recipe, because shea butter does not agree with my skin, GASP! and I can not in good conscience, knowingly, condone the use of palm oil. I could go on for days on this one topic, especially those who say they only get there palm oil from “certified” suppliers, sadly, odds are those suppliers bribed some official that gave them the permit to put that stamp on their palm oil. In truth, you can’t be certain your palm oil is sustainably harvested unless you’re there watching it be harvested. Please, please, please do your research before choosing to soap with palm oil. Steps off soap box now (pun intended). So I spend days at a time trying to find my sweet spot oil mix that does everything I want and need it to without using those oils. Talk about going cross-eyed.
The plus is that cocoa butter doesn’t bother me at all, maybe because I grew up using it?, or not cuz I have to use coconut oil sparingly and never on my face. So I thought, “this is great I’ll just exchange cocoa for palm oil and life will be grand”. Yes, I knew that there are several differences between cocoa butter, shea butter and palm oil, but you gotta experiment sometimes.
My first batch that I put through the lye calculator was perfectly balanced, as in 50% saturated fat to 50% unsaturated fat.
Avocado Oil – 10%                             Coconut Oil – 28%
Castor Oil – 5%                                   Grape seed Oil – 10%
Cocoa Butter – 35%                          Safflower Oil – 12%
It’s got a bubbliness of 23 out of 46, a creaminess of 33 out of 48, a cleansing of 19 out of 22, conditioning is 48 out of 69 and a hardness of 48 out of 54. While I wanted a little more conditioning I have to admit it is pretty well balanced all around and smells like chocolate (whoo! cocoa butter).

So, I plugged on with this months challenge, the Cosmic Wave technique from Creative Soap by Steso, with high hopes.

If you know me, you also know that my funds are never on par with my crafting goals, and if you remember from my last soaping endeavour I had run out of coconut oil at the end of that. So, now I had to order more coconut oil, but not the 5lbs from previously, I could only afford 12oz. (insert sad face here) from amazon. I did get some really nice cocoa butter and very very fine activated charcoal as well, so it wasn’t all bad.
I went ahead and mixed my lye and oils, and that’s when I realized that this batch was way to fast moving for the work I had to do. And, yes, those two smaller containers hold 15% of the total batch weight. Since I only work in 1lb batches (finances be hold a kid hostage), it’s a really, really, really small amount. I was working with a dark base, that large container is supposed to be red, yep red (sigh), looks flesh coloured to me.

But I went ahead anyway, no use wasting perfectly good soap ingredients, and I wanted to practice the technique. I mixed one of the containers with 1tsp activated charcoal and left the other one white. It actually wasn’t that bad, if you pretend that the flesh tone is red. 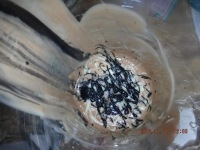 It looks good but not what I was going for at all since my inspiration is the Flag of Trinidad & Tobago, hence my reasons for a red base.

I guess it sorta kinda looks that same.

So I decided to try again, this time using the recipe that I used for wood grain, I knew it moved slow enough for this kind of work, since it lasted long enough for the wood grain.

Back to the drawing board I went, and wouldn’t you know it, ran out of grape seed oil and safflower oil. OK I wouldn’t say ran out, more like had .05oz less than I needed to make my recipe the right way before I had no more left in the bottle. But what can you do? I thought of adding canola oil to fill in the gap but I wasn’t sure what that would do to the numbers and honestly I was to far into the process to sit down and recalculate all this (plus, I haven’t been good at math since freshman year of high school). Other than that, it was actually going very well, soaped between 95- 105 degrees, added 1/2 tsp sugar to lye water, made my red colour out of 3Tbs of red Moroccan clay and 1Tbs paprika to 1Tbs oil (fingers crossed on that one), my black was 1/2tsp activated charcoal to 1Tbs oil and went to work

It’s definitely more red, but more on the red brown side (well at least it isn’t flesh coloured, seriously, that colour totally reminded me of the ‘gangers’ on that one Doctor Who episode (See below). I think I’ll have to invest in some oxides for the bright colours I need in some things (I’m trying to stay away from synthetic colours and fragrances). 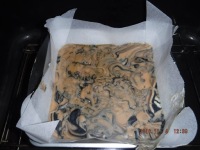 But I digress, I tried again with my semi-modified batch and it looked amazing in the pot,

I could even live with that pumpkin like colour and just pass it off as a side effect of using natural colorants, I mean I wasn’t expecting bright, just more of a ‘washed out’ feel you could say. I also knew that this recipe takes days to set up without the help of CPOP (cold process-oven process), so into my portable oven it went to spend a few hours…

Keep in mind I had already made a batch of this using the new recipe listed above, so when it was done I compared the bars and while it wasn’t at all what I was going for they came out great!

I decided to try one more time, but of course I had to hit the stores for more oils, thank goodness this was pay week! Now, stocked up on more oils, I tried again. This time, instead of using a dark base I decided on a white base using the charcoal and red clay as the accents, though from that top bar you would think I had used a light base on that one too (sorry, forgot to take a pic of all the colors).

I used 15%  of the total soap weight to make the accents colours just like the directions said, then I split that weight into thirds, using 1/3 in the charcoal and 2/3 in the red clay. The reason I did this is because in all the other times I did my ‘pot swirl’ part of the design, the charcoal always seemed to last longer than the other colours, so I decided that I would use less and see what would happen.

Gotta admit, it looked a lot better this time around before putting it into the oven for CPOP. The red is never going to be as bright as I want it to be, until I can afford an oxide colour pigment. Something on my wish list on many a web site. Now, just to see what happens when cut… 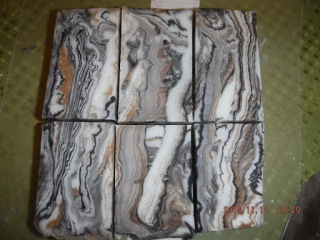 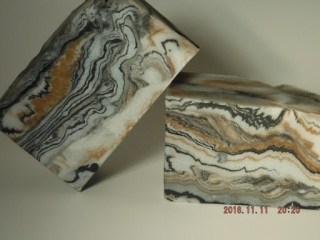 Must say 3rd time is the charm. Out of all the ones I did for this challenge of course I like the last one best.

What did I learn from this?

Once again, thank you for reading and I hope you enjoyed my ride on this wave…if you have any questions or comments, please don’t hesitate to comment below.

12 thoughts on “Ride The Wave”